Romance is Not Black and White; Readers Deserve More Color. 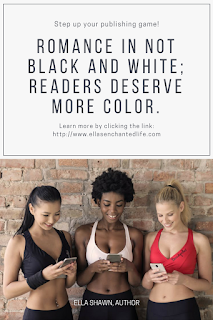 What's your fantasy?  Who's your favorite book boyfriend and why do you love him so much?  As a romance reader and writer, I ask myself these questions before, during, and after I read or write any romance.  I read and write romance because it is a fantasy and the opportunity to explore a diverse group of book boyfriends and book besties is what makes it so much fun.

I have always loved a brooding, domineering, sexy as sin man. Dark hair, piercing and expressive eyes, full lips, a hard jawline, great hair or no hair, and a tall, lean, muscled body.  A great ass and a large package can't hurt anything, right? Oh, and his voice needs to sound like warm caramel poured over chopped bourbon-soaked, roasted pecans. I don't for the life of me know why I love a dirty-talking man but God help me, I do! The dirtier, the more he curses, the filthier he speaks... the more I love him. The more I root for him to find someone who appreciates it and him as much as I do.

While my tastes are not unique, many women love the same kind of book boyfriend as me; I don't know that every reader can appreciate these qualities in lead male characters who aren't white.  This is where I have a huge problem. When considering the demographic breakdown of readers of romance, one needs to question why there is so little diversity in the leading characters, circumstances, and settings in mainstream and self-published romance novels.

I went searching on RWA Website and found this information: Not shocking, but very telling.

Based on this data, the romance writers' target audience is heterosexual, white females between the ages of 25-34. And since people tend to read books with characters and plots that are more relatable to who they are; these demographics don't leave a lot of room for diversity... not really.
After thinking about the industry and those who support romance writers, I'm left with one question.  Why aren't white, heterosexual women between the ages of 25 and 34 reading romance novels with more diverse characters.  Why aren't they demanding more beautiful Black, Latino, Asian, and/or Middle Eastern men and women in their hot, steamy romance reads? Okay, so it was more like two questions but you know what I meant. Anyway, I read The Crossfire Series by Sylvia Day and was totally ruined for any other book boyfriend. EVER!!! I can't even write a book boyfriend for myself who surpasses Gideon Cross and lord, how I wanted Eva Tramelle to be my book bestie.
What does my sick obsession with Gideon Cross have to do with anything?  I'm a Black woman who lives in the south and happens to love Black; when I say Black, I mean dark-skinned, chocolate men with baldheads and pretty white teeth.  My husband hates when I bring up Gideon's name.  He has called that poor character every name under the sun because I told him if I ever met the real Gideon, you know if he was real and all, I would leave him in a hot minute. Just for one night and one day and one more night with Mr. Dark and Dangerous, himself. LOL!
But I digress.  My love of Gideon Cross transcends his race.  I don't care how he identifies ethnically or racially. I love everything about him because he's so well written and meets all of the criteria for best book boyfriend ever.  As a Black woman, I can read and appreciate a diverse group of leading characters, but I don't know if the same is true for the largest demographics among romance readers.  And this a major problem for romance writers of color who write stories with diverse lead characters.  I don't know if white women have trouble buying romance novels with nonwhite leads or if there is some other reason they don't tend to read them. I do know they don't seem to have trouble dating, marrying, and building lives with nonwhite men and women. I'm just saying 😕.
After digging through the net, I came across several articles about the lack of diversity in the romance publishing industry and it comes back to those who are in power, rather than those who make purchases.  The target audience will buy what publishers offer.  If publishers aren't hiring authors of color to write and produce romance, then there is no opportunity for buyers to read a romance novel with diverse characters.  I could ask and pontificate on the why behind the publishing industry's lack of attention to the changing landscape of romance readers or I can share an interesting quote from an article I read on Entertainment Weekly.  Two sisters did research into the publishing industry's lack of publishing of writers of color and the findings were "bleak and abysmal."
The sisters, Leah and Bea Koch were inspired to do the report because they could not find novels written by people of color published by traditional publishers for their readers in their bookstore, The Ripped Bodice. Maureen Lee Linker reported on their report in her article on the lack of color in the romance industry.
The end of Linker's first article closes with the sisters sharing why they feel it's important to get people talking about the issue.

“It’s too important. We have to start with laying out the facts. This is the genre we love and have devoted our lives to. We all need to do better,” Bea said. Leah added, “The traditional romance publishing industry is going to collapse if it doesn’t start hiring authors that reflect the current U.S. population. We’re hopeful that by contributing this data to the discussion, we will start to see real change.”

Pay attention to what is being offered to you.  There is a huge buffet of romance novels out here and every reader has the right to demand access to all of them.  You don't know what you're missing if you don't know it's missing.
Remember life is a journey and sometimes the Universe gives you enchantments to make the journey a little easier. Keep reading and stay enchanted.
Ella 🙏
Labels: book bestie book boyfriend Diversity in Romance Fiction Gideon Cross News Publishing Race issues Sexuality Sylvia Day The Crossfire Series The Ripped Bodice Women