Passion and Lust: From a an romance writer's perspective. 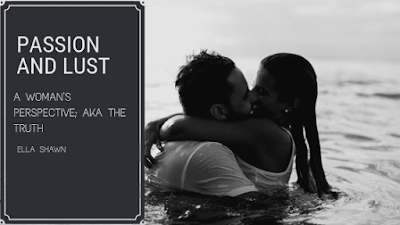 “Man can never know the loneliness a woman knows. Man lies in the woman's womb only to gather strength, he nourishes himself from this fusion, and then he rises and goes into the world, into his work, into battle, into art. He is not lonely. He is busy. The memory of the swim in amniotic fluid gives him energy, completion. Woman may be busy too, but she feels empty. Sensuality for her is not only a wave of pleasure in which she is bathed, and a charge of electric joy at contact with another. When man lies in her womb, she is fulfilled, each act of love a taking of man within her, an act of birth and rebirth, of child rearing and man bearing. Man lies in her womb and is reborn each time anew with a desire to act, to be. But for woman, the climax is not in the birth, but in the moment man rests inside of her.”
― Anaïs Nin, The Diary of Anaïs Nin, Vol. 1: 1931-1934

I remember the first time I experienced what I later found out was lust.  I was maybe twelve years old in middle school.  I saw the most beautiful boy in the world.  His skin, the color of a perfectly sweet pecan. Smooth and glowing, he looked like everything my pastor told me to stay away from.  Any time he turned his amber colored eyes to me, my cheeks would get warm and my palms would get a little moist.  I always felt like he could see my heart beating under my shirts.  I had never reacted to a boy like that.  I dreamed about his full lips. I wanted to know what they would feel like pressed against my own even fuller ones.  I would sneak peaks at him when I thought no one was watching, and smile when he would catch me looking at him.  We played a cat and mouse game for the entire sixth-grade year.  The summer of our seventh-grade year, I decided I was going to make him mine; come hell or high water.  I am happy to say his lips felt as wonderful pressed against mine as I knew they would and his furtive tongue flicks were the cause of the first licks of lust pounding through my body.  I loved how my skin felt too hot and too cold; too small and stretched to its limits.  The surefooted ponies galloping through my chest making my belly swell with butterflies and how my breath would lose its rhythm and become stuck in the back of my throat... and I still do.

Thirty .years later and my memory of that heady time in my adolescence is as fresh and sweet as if it happens every day.  Maybe that's why lust is such a powerful driving force.  It fills the spaces between needs and wants in the most amazing way.  Causing the mind to empty of the ridiculous notions of what is right or what is wrong.  The questions of should I or shouldn't I.  Lust frees the human animal to be exactly what we are meant to be.  Sexual and honest and happy, right?  I remember asking questions in my youth to anyone brave enough to hold a conversation with me. Question about why lust and sex were so wrong, and if it's so wrong why are we driven to by both acts.  I never got a good answer, so I decided to do whatever the hell I wanted to do and refused to care what other people thought of me or my actions.

Here's the thing, though.  I have never been promiscuous.  If I put my sexual history out for the world to see, it would be pretty mundane. And I write erotic romance novels, too.  I have never been shy about sex, but I have always known I would not be one of those women who would have many lovers over my lifetime.  I'm not cut out like that.  I love sex and being sexy, as well as being sexual; however, My approach to all things dealing with sex has always been more in depth. It's a spiritual thing for me and this is where I have always been able to differentiate between lust and passion.

My first brush with the feeling of lust was euphoric and wonderful, but it was a kiss and my first with tongue.  It was three years after that first kiss with tongue before I got my second.  I went a little further with the beautiful boy who gave me my second kiss, I was a junior in high school after all.  Most of my friends had already had several sexual partners, I was still a virgin who had only let a boy get to second base.  The lustful feelings were more intense because I was older, he was older and more experienced and my body was biologically ready to experience sex. Which made me question the validity of people being out of control because of lust.  I almost gave my virginity to that second boy, but something was missing.  I loved the way he made me feel.  Hell, by the time our relationship ended, we had worked ourselves up to third and a half base... 😋but no home run. If all I needed was the pounding feeling of lust to go all the way, I had that in spades.

Merriam-Webster defines lust as a: an intense longing: craving b: enthusiasm, eagerness, and defines passion as intense, driving, or overmastering feeling or conviction.  I may not be the smartest cookie coming out of the oven, but I'm fairly confident in saying passion and lust sound awfully similar in their definitions.  But for some reason, passion is elevated to the realm of love while lust is relegated to the bowels of just sex. I read several articles that all basically said lust was focused on personal gratification and passion was focused on mutual gratification.  That boy I almost gave my virginity to told me that people lie when they tell you they want to make you feel better than you make them feel.  He said every person having sex is trying to make themselves feel as good as humanly possible.  Then he imparted a wisdom on me that has made me a sexual dynamo, okay...  not really a dynamo, but I at least enjoy sex a lot more than had he not shared this with me.  Here it is.

"When I have sex with a girl, I tell her to work as hard as she can to make herself feel good.  As hard as she can to get me-me or to come.  And I'm going to be working as hard as I can to do the same for myself.  If we're both working our hardest to come, we will have explosive sex."
~Boy I almost had sex with.

The only reason he wasn't my first is that I met and instantly fell in love with my husband, who greatly benefited from all the advice of that boy, lol.  But his phraseology helped me define for myself what lust and passion are.  Lust is the biological longing to connect sexually with another person and passion is the spiritual longing to become one with another person. When a woman takes a man into her body, she takes him into her soul.  He becomes a part of her forever.  When a man enters a woman's body it's like plugging into the source of life and he is energized and renewed.  Lust is the conduit through which passion flows and completes the human to human connection.

Now that I have spoken the truth about lust and passion, I urge you to remember life is a journey and every so often the universe sends you enchanted stepping stones to help you along the way. Keep moving forward and always stay enchanted.