Why The Hell Do I Keep Writing?!

Seven years ago I was a suburban wife, mother, and teacher who developed lupus and had to leave my career. Since I had to be home and had always wanted to write romance, I decided to take the plunge. It took me four years to write my first novel... learning to live with lupus and all the other 💩 that comes along for the ride is a constant struggle. I released my first book back in 2018. Back then, I had no idea how to launch a book and make it successful.

It's been two years, and I know I've only moved about thirty units, including Kindle Unlimited. At first, it didn't bother me because I wasn't writing to earn a living. I was writing because I had a story living inside me and felt compelled to get it out into the world. Of course, I want people to read my novels and leave me reviews. Everyone wants their hard work to be acknowledged and appreciated, but that's not why I continue to write.

I'm preparing to launch the second book in The Broken Souls Series in roughly three months. This time around, I know so much more about promoting my books and using marketing strategies to cultivate a reading audience than I did just two short years ago. I will be using them to not only launch my second book but to give y the first book in the series a push and build momentum for the release of book two. And even with my newly acquired knowledge and the desire to become a best-selling author whose words impact and inspire millions; book sales are still not the reason I write. You want to know why I devote 4 hours/day for 3 to 4 days/week to my writing craft? The answer is as simple and complex as the novels I spend most of my time writing.

I write to understand my own thoughts. To make sense of the world in which I live, love, and wander. I write because if I don't write, how will I know what I'm thinking?~Ella Shawn

Apparently, I'm not the only writer who has this affliction. I'm in great company as far as I can tell. Writing has never been about book sales and making money for me; not as much as it is about figuring out what the hell any of THIS means. THIS being life. I have always written in an effort to answer the five W's. You know the ones we're tasked with during early elementary school... yeah, those. What? When? Why? Who? How? I never quite understood why 'how' was lumped into the 5W's, but whatever. I digress.
Maybe all writers are just trying to answer the 5W's and somehow, what they write resonates with someone who happens to read it and they share it with someone else... and then Netflix turns their writing into a movie. One of my favorite writers, Flannery O'Connor said something similar to my own reason for writing and it made me ask this question, "Did Ms. O'Connor start her writing career with the hopes of becoming one of the most revered short story writers from the 20th century or was she just asking and answering questions like me.

“I write because I don't know what I think until I read what I say."~ Flannery O'Connor 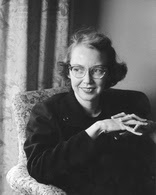 Flannery O'Connor is one of my favorite writers to emerge from the South. She wrote with such brilliance and tenacity, all while exploring the ideals and values that made up her world. She's best know as a short story writer, but she also wrote a couple of novels. O'Connor's writing is acutely introspective with overtones of spiritualism that have been shaped by her southern, catholic heritage.
It could be that she wrote short stories like Good Country People, to answer one or two of those five W questions. Why were some people considered better than others? Or maybe she was pondering the outlier. How can people use religion as a perfect cover for their depravity and get away with it? Writing isn't about becoming famous or rich, it's about answering questions that won't let sleep come at night. It's about finding out how and where and why you fit where you fit, or don't fit.
Flannery O'Connor said, "I write because I don't know what I think until I read what I say." Only a writer can possibly understand that statement. Our thoughts don't belong to us until we're able to see them crawl across the white paper like little black ants. Forming ideas and making connections we're not able to fathom until we read what we said. But--and let me be clear about what I'm going to say--I am still wondering why I'm compelled to write and publish books when very few people seem to read my words.
Trippy Note: Flannery O'Connor died of systemic systemic lupus erythematosus when she was 39 years old after battling it for ten years. At the age of 39, I was diagnosed with systemic systemic lupus erythematosus and started my writing career.

I Don't Know How to Build an Audience or Sell Books...

Fast forward from 2018 to right now; nothing has changed. I'm preparing to launch the second book in The Broken Souls Series and nobody has even read the first one... but I have a better understanding of the whole #IndieWriter as a business model. First, I have to drum up interest in the first book during the three months of my second book launch. I'll be reaching out to eleven book promotion sites and pay the nominal fee to have them promote Âmes Brisées/Broken Souls. This should yield more downloads, reviews, and hopefully interest in the second book, Mirrored Souls/Âmes en Mirior!
I'm excited about what I've learned over the past two years about writing and publish, but it still hasn't changed the reason I neglect my husband and children and the outside world to sit on my ass and write. Even though I'm looking forward to the time when my email list has more than twenty people on it, it still doesn't change the reason I didn't realize we were under a COVID-19 Stay Home order because I was going to do that anyway to finish the final edits Mirrored Souls 😂. I started writing this article because I needed to figure out what I thought about something that's been nagging me to no end. A question, I'm sure every writer has asked themselves over and over again.

Why the hell do I keep writing when no one gives a damn about what I have to say?

After writing this article, I finally know what my thoughts are about that annoying question. It's as simple and as complex as the third book in The Broken Souls Series.💫 I write what I need to understand. I write when my thoughts are jumbled in confusion. I write because there is no other option. I write about who I aspire to become or what I detest about what I've already become. I write to figure out how I'm meant to leave a record of all I experience.
It appears that Flannery O'Connor and I have more than our southern heritage and lupus in common 💜😊, we both write because it's the only way we're able to know ourselves... the only way to look beyond the facade we wear for everyone else and see the exquisitely hideous and austerely vulnerable little things we are.
Remember, writing is a journey, we all have to take our own path to get where we are going. You can only live one enchanted moment at a time. Until next time; be brave, be beautiful, and stay enchanting.