I don't think my idea of happily-ever-after is the same as other romance writers. Scratch that. My idea of happily-ever-after is nothing like other romance writers, owning my shit and everything. It's taken me a while to come to terms with that and a little longer to find the courage to write the words down.  There are so many tropes, genres, and niches in the romance writing scene and still it's all pretty much the same basic formula Disney uses to get little girls to believe that some day their prince will come and rescue them from whatever evil has befallen them.

Of course, there are some variations on this formula but ultimately, this is how romance novels are born.

I'm not saying there's anything wrong with writing and reading the quintessential romance story with happily-ever-after most people look for. I love a good sweet and sassy romance read as much as the next girl, and I also live in the real world where shit isn't always tied up with a neat bow. Some times, the romance is tied with a length of course jute rope or maybe an extension cord--one still attached to an outlet--yet these happily-ever-afters are no less fulfilling than others.
When I first started writing, I wasn't quite sure what genre I was working in. Erotica was the first one I looked into and promptly found I didn't meet the criteria for that genre alone. I love writing graphic sex scenes... giving a bird's eye view into the sexual experiences of my characters is fun and liberating; however, it's more than the explicit sex that drives my characters and plots. Like I said, I love the happily ever after as much as anyone and I love seeing how all the wheels and cogs have to come together to make the entire system run smoothly.
That being said, I also have an insatiable need to explore sexuality as a conduit into spiritual awakening for both my heroine and my hero. Sex isn't just written into my stories because I'm a horny, housewife writing for other horny housewives. I write intimately about sex because I truly believe it is one of the most important ways to connect with self, others, and the Universe.
This next bit will be discussed while wearing my favorite KEEP-SHIT-REAL hat, if you don't have one of these hats, I suggest you go to my shop and get one. There's power in words and all that. 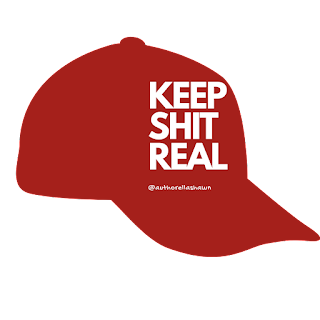 A woman's sexuality is the most fluid sexuality I know of. Yes, some of us will try to deny our sexual fluid nature. Why continue to eat the lies and misinformation the patriarchy has been feeding us since they realized just how powerful our sexual nature was. Power they could no more control than they could control the rising and falling of the tide. Power they could no more understand than they could the innerworkings of a woman's mind. It's for those and similar reasons women have been systematically forced into some kind of tiny square box; even though we're all kinds of circles and curves. I'll talk about the square and curve thing in another post but for right now, I want to explore the sexual fluidity within women and how I explore it through my heroines in the dark romance novels I  love writing. By the way, that's the genre I write: Dark Erotic Romance. Took me a while to figure that shit out and once I did, I had no more reservations about sharing it with any and everyone.

[Note] Pretty much everything from this point on is based on my opinions, personal experience, and my own definition/understanding of divine sexuality.
Divine feminine sexuality is where Universal Knowledge(male) and Universal Creativity(feminine) join together  to produce bridge between the physical and spiritual world.
As a heterosexual woman, I'm sexually attracted to men. However; as a divinely  sexual woman, I can't help how I feel when I see a beautiful woman walk into a café. I find myself looking at every aspect of her person, from her hair all the way to her shoes.. Taking note of how amazing her tits look or how great her jeans ride her ass... and because I'm so bold in my divine sexuality, I seek her out just to tell her what a beautiful woman she is and how great I think her ass and tits look in what she's wearing.
Here's where the power of being a divinely sexual woman comes into play. It allows me and other women who've tapped into it to move through our lives without restraints on who we share sexual energy with. NOT WHO WE HAVE SEX WITH. Sharing sexual energy is the cornerstone of creativity and creativity is the only way to interact and understand the Universal Knowledge. Meaning, being sexually fluid on an energetic level opens up multiple avenues to connect with and access what is needed from the Universe.

Most of the women I find myself attracted... drawn, fascinated, intrigued, interested, and/or enchanted to, by, in are almost always heterosexual. Just like me. And almost always these heterosexual women respond in kind to me...saying, "I was going to stop by your table and tell you how gorgeous you are with that haircut..." or, "I noticed you when I walked in and thought that woman has such a beautiful smile, I wonder if I should tell her?"
Still not seeing how powerful divine feminine sexuality is? Okay, how about this.
My current series, the Broken Souls series, is centered on my heroine, Vivian. I'm not a liberty to divulge everything about Vivian because, spoiler alert. But, I will share this about her character. She was always afraid of her sexual self because she wasn't allowed to discover it so much as she was forced to watch others take it away from her at an early age. However, she comes to realize there is power in sex. A power that is, at first, superficial and only based in getting what she thinks she needs and then... This is where I did deep into the marrow of divine feminine sexuality.... through  her monogamous, BDSM relationship with the series' hero, John, she discovers the healing power of sex. Still on a somewhat superficial level, but also on a subtle, emotional level too.
As the series goes on, Vivian embarks on journey into herself where she has to confront all of her shadow selves, make peace with them and learn to embrace and love them. This is where she discovers the true transformative power of divine feminine sexuality. Here's the gospel I preach through my dark erotic romance and pretty much every other thing under my Enchanted brand:

A Woman's Divine Feminine Sexuality is the Conduit to Not Only Her Spiritual Awakening, but It is How the Universe Seeks to Awaken All of Humanity.

Did you learn anything from my snazzy infographic? I hope you did, it took me like forever to make it so... show some appreciation. I'd hate to be in my car yelling about how I want to be appreciated. 😂
But really, this is the foundation of my entire Enchanted writer's platform. Most of what I write is fundamentally further exploration into how a woman's sexuality, her connection to divine feminine creative energy and taking ownership of her own sensuality is the key to elevating all that Universal Knowledge to humanity's consciousness. Let everybody know we are all connected and there is no such thing as separation between me, you, and the Universe.  Oh, and I do it all while giving those horny housewives loads of fanny flutters. 😆
Remember, life is a journey and just because I wander doesn't necessarily mean I'm lost. Thanks for being a part of my enchanting life as a romance writer... one enchanted story at a time. Ella
Sign up for Newsletter, promise not to SPAM
Labels: divine feminine woman's sexuality Writer Blog