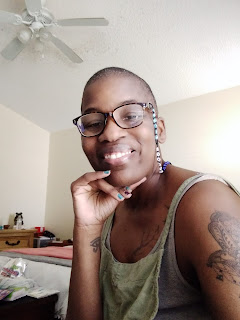 Her debut novel, Âmes Brisées (Broken Souls) was released on August 18, 2018, and has received 5-stars reviews on Amazon and Goodreads.  She is currently working on the 2nd book, Âmes en Miroir, in the Broken Souls trilogy to be released by August 2020.

When asked to comment about her writing and intended audience, Ella had this to say:

Ella enjoys mixing hot and steamy sex with intellectual spiritualism all while weaving magic with her eloquent and poetic phraseology.  She’s a master storyteller who believes romance novels are the most important genre in the literary world.   Why?  Because within the romance genre, she is to explore not only romance but intimacy, dating, marriage and the many facets of relationships as it relates to women.

When she’s not being a Goddess and overseeing the worlds and lives she’s responsible for creating, you can find her spending time with her husband, three daughters, their dog, and one or more of the eleven guinea pigs they house.  Or she may be painting, crocheting, meditating or sweating it out in a hot yoga class.

She readily admits she would be a nomad if her husband and children would be willing to pack up and hit the road with her, but since they are not; she’s indulging her nomadic, bohemian spirit with the renovation of her 1968 Vintage  Starcraft camper trailer which will eventually be used to travel around the country in the summers without a plan or a map or GPS.