ÂMES BRISEÉS (Book One of the Broken Souls Series) IS AVAILABLE EVERYWHERE! 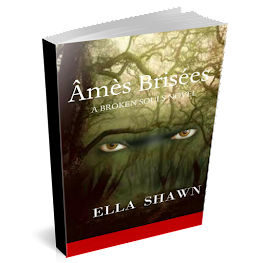 Johnathan R. Ellis walked away from his small-town life in coastal South Carolina, taking with him the stench of violence, sexual depravity, and death. He went to college hoping to find redemption, but what he found instead was her.
Vivian A. Bruno is your classic introvert; shy and reserved but passionate and creative, as hell. She's a survivor of sexual abuse, but she’s nobody's victim. She can see no reason to give up her newfound freedom and sense of control. But then again, John Ellis isn’t just any old reason.
Will Vivian's love be enough to redeem John of his past transgressions or will his brutal need for Vivian be the final break in her armor?
Trigger Warning: This new adult dark romance is filled with explicit language, sexual acts, and physical violence. If this is not your kind of romance, do not read. Take care of yourself. 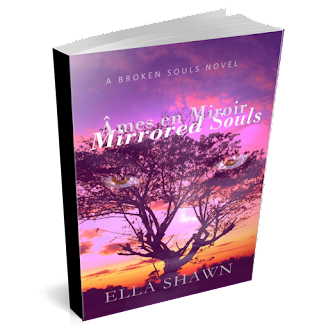 Souls are only able to recognize their own enchanting light when made to face the malevolent darkness of their Mirrored Soul.
A PLAYFUL DARE. HIS FOOLISH PRIDE. A NIGHTMARES BECOMES MY REALITY.
Now, I'm pregnant and I can’t remember anything since that night—six months ago—when John broke my soul for his foolish pride. He says he's the only one who can put me together again. There's a new voice in my head that believes he can and will, but there's another… angry, depraved, jealous voice who hates me. The secrets hidden away in my mind can't stay there if I'm going to reclaim my life, my marriage, and my sanity.
A DEBT REPAID. CHILDHOOD SECRETS REVEALED. SELF-DISCOVERY BEGINS.
Mirrored Souls (Âmes en Miroir) continues John and Vivian's story from Âmes Brisées (Broken Souls) left off. A soul-crushingly, dark romance by Ella Shawn that challenges every established notion about love, forgiveness, and compassion.

HEARTBREAKING. SENSUAL.  TRANSFORMATIVE.  TANTALIZING.
Amazon /  Amazon UK / Amazon CA / Amazon Au
Consecrated Souls, the third book in the Broken Souls series, proves to be as boldly written as the first two novels in the epic story that seems to intersect across time, space, and heartache. Ella Shawn continues to weave her enchantments throughout her lyrical, Southern Gothic erotic series. Consecrated Souls will not disappoint fans of dark, erotic romance. Jonathan R. Ellis and Vivian B. Ellis are still learning how to maneuver in a world where there can definitely be too much of a good thing.
John knows he only has one more chance to claim the love of the only woman he's ever loved. It will not be easy, but nothing worth having ever has been. He's more than ready and willing to fight for the life he's worked so hard to build.
Vivian and her girls are stronger than ever. Each stepping out into their own lives. Pursuing their own passions. Valery finally accepted her place in this eclectic group and is thriving as she continues to learn to support her friends and herself. Vera is still shy and prefers to stay in the background, but every day she's growing more aware of herself as an individual and proves to be quite the cheeky girl.
Consecrated Souls is the mediator between introductions, laying the foundations for happily-every-afters, and the last three books of the Broken Souls series where Vivian, Valery, and Vera finally get their HEAs. 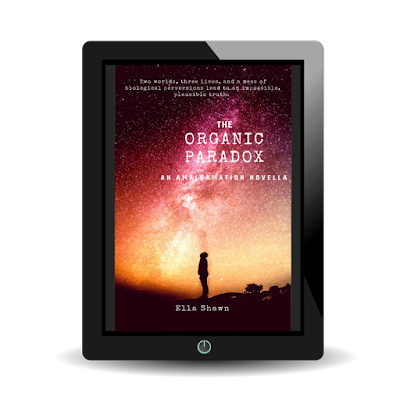 Vatruvians are anatomically comparable to human beings... same body parts in all the same places--if on a slightly larger scale, so it makes sense to pair with their small human counterparts to ensure the survival of their race. Earth is more than excited to work with the alien race of beautifully advanced Vatruvians. Each leader has chosen one male and one female to become a triad with a Vitruvian bonded pair.

It is an honor to have been chosen, but for Sebone it is also a dream come true! She has never been accepted by the men who should love her, so she is excited to become a part of a triad with Mateo and his bonded mate, Leeza. Sebone has prepared her home, informed her job, and made peace with those who abandoned her when they found out she accepted the contract.

Mateo and Leeza have been bonded for some time now and although it is not natural to bring another person into the bonded pair; Mateo is more than excited to meet the small human called, Sebone. Leeza is not as excited about bringing an inferior female form into their bond. From the moment they touch down in Sebone's yard, Leeza decides she doesn't want this to work. The moment Leeza watches Mateo's eyes start to glow upon seeing the small shiny human female, she knows she has to do whatever it takes to keep them away from each other.

Will Sebone finally find what she's been looking for in her Vatruvian bonded pair or will it only lead to more heartache and pain at the hands of a jealous Leeza?